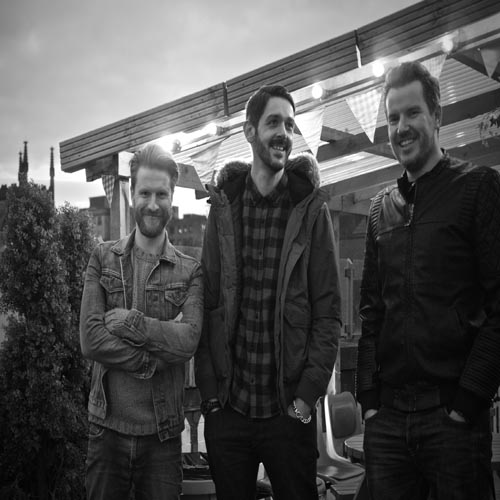 Its now time for our 30th Guest mix and its someone we have been trying to get involved since we started Death By Repetition …. CLANDESTINO!!!

A little bit about them :

Clandestino are a trio of veteran DJs, promoters and producers from Leeds. Joe Morris, Nick Smith and Iain Mac have been involved in the city’s underground music scene for over 15 years; regularly throwing diverse parties and bringing exciting new DJ talent to town. Their visionary booking policy saw them regularly invite Erol Alkan, Tim Sweeney, Simian Mobile Disco, Optimo and Joakim to Leeds long before they became the established acts they are today.

Their sound takes in influences from the glory days of Acid House, the melodic elements of Balearica and the freedeom of Disco while always being focused at the dance floor.

Now starting to become in demand themselves, Clandestino have a bunch of releases out in 2015; their EP for Is it Balearic is out now which is followed by an EP for Manchester’s EL Diablos Social Club featuring a Hardway Bros remix; an EP for Rothmans Music, an exclusive track for Yam Who’s Midnight Riot compilation, plus remixes and EP for Tronik Youth’s Nein Records imprint.

They have some exciting gigs coming up with their next party in Leeds on 6th March with Young Marco and they are also playing Alfresco Festival In Blackpool and Electric Elephant in Croatia !! Fun times ahead !!

Here is the guest mix :

They have also agreed to do an interview for us as well :

(Iain) I wanted to cover as many of the bases of the stuff that I’m into at the moment, stuff that’s inspiring me and tracks I’ve been playing lately. Rather than bunging all the tracks we’ve got coming out this year (plug plug) . It’s got a bit of Afro tinged stuff, some techy stuff, a couple of oldies and some funkier things. I hesitate to call it eclectic because it’s got a fairly consistent vibe but it does cover a good few genres.

Any advice to give to aspiring DJs?

(Joe) The old mantra still applies: stick to what you believe in, perfect the craft and don’t get sucked in by trends

(Nick) What Joe said. Though I’d add don’t get too hung up about perfecting mixes, it’s the track selection which is most important. Record yourself, one of the best ways you can help develop your style

(Iain) I bought my first decks in 1992. I wasn’t one of the people who pick it up instantly, it’s fair to say it was quite a few years before I felt competent enough to inflict my mixing on anyone but close friends. I always had the urge to make my own tracks but it wasn’t till I bought my first Mac in 2002 that I did anything about it. I’m completely self-taught, there’s a load of dodgy mashups I’m responsible for littering the Internet from the early days.

(Joe) I learnt the basics on some battered old belt drives way back in the early 90’s as most people did then. Production-wise; I picked up a few pointers from my peers when I got into it around 2005/6, but I’m pretty much self-taught.

(Nick) I started off by buying a pair of SoundLab belt driven decks in the early ninieties, taught myself how to mix and played at friend’s house parties. With regards to Production, I started around the same time as Joe   and also self-taught.

(Iain) I’m 100% Ableton at the moment, its sound still bugs me sometimes but nothing else I’ve tried comes close to how fast it lets you get things done.

(Joe) As much as I’d like to reel off a massive list of vintage analogue gear to you; the truth is we almost exclusively use Live with a few choice soft synths. It means we’ve learned how to get the best out of what’s available to us know how to use them inside out

(Nick) It’s limited. Currently, we use Live with Minimoog, Jupiter V8, Disco Pro VST’s. On the flip side, we’re trying to get the best out of what we have between us and this helps develop our creativity.

(Joe) Weatherall always comes top of these lists, and for good reason. Back in the day I used to love X-Press 2’s six deck thing and at the moment Young Marco is the one to watch. A proper DJs DJ. Sorry for the use of such a wanky term but it’s true.

(Nick) Seeing Despacio at Sonar last year completely blew me away. I don’t think I’ve ever felt such a build up of excitement and energy in one room. Felt like the place was going to erupt at any moment, amazing.

(Iain) Sankeys was a pretty special one, as was the Warehouse in Leeds. We’ve got a few festival dates lined up this summer, I’m really excited about them. Next up is our return to Wire in Leeds on March 6th, that little rave cave is the first place we promoted events 10 years ago.

(Joe) The main stage at Electric Elephant right before Frankie Knuckles as the sun went down is a hard one to beat. Playing a wooden hut up a mountain in Austria at Snowbombing Festival was good fun too

(Nick) Playing along side Joe before Frankie Knuckles at last years Electric Elephant was pretty immense.

When we first played Croatia at Airbound festival. Looking out from the DJ booth across the Adriatic with a glowing full moon was special.

Talk about some more influences

(Joe) New Order, Kraftwerk, Ibiza and Balearic beat, LCD Soundsystem, Talking Heads, Detroit motown and techno, Afrka Bambaata, disco, electro.. just so many.. We pull influences from most past underground electronic movements and we try and let them affect our vibe in some way. A sort of carrying on the torch as it were

(Nick and Joe) Clandestino – Delta (unreleased at the moment)

Latest release by Clandestino as well :