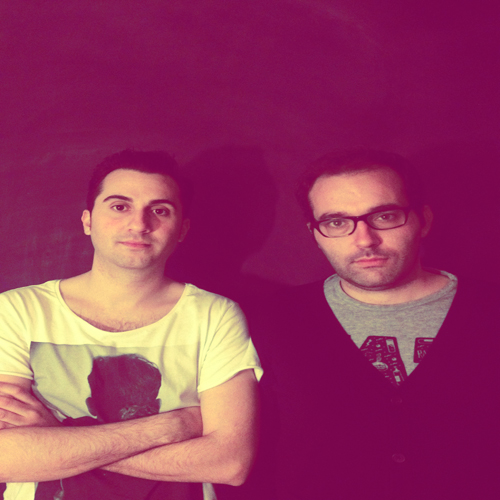 Disko Selectors are Deeman & Roi Canda, their mix series “Serie Disko!” is how I first found out about them and they have had superb guest mixes from DJ’s such as Timothy Fairplay,  Rotciv, Sequencers, Club Bizarre and many others . Their own mixes and live sets are fantastic and they are just starting to release their own original material which is getting better with every release.

They have agreed to do an interview for Death By Repetition and here it is :

We are from Valladolid, Spain. It’s a small city in the north of Madrid.

Three years ago we started in our city, with our partner Alberto Gomez (he’s a great designer),a clubnight called Disko! .
As we were the residents we put on posters the name Disko Selectors.
One year after we stopped the parties but we liked the name so we continued with it.

We have been friends for many years,maybe ten or twelve. Our girlfriends were friends, I was the resident in a club and Javi began coming to the parties… and slowly, seeing that we had some similar tastes and we lived in the same neighbourhood,
we started seeing outside the clubs. After that, I taught Javi how to
DJ  (which by the way he liked much more electronic music than me),
and since then we played together.

Well, I began in a club like public relations because a friend would be responsible
for that club during the early hours. I think I was 18. The opening
day there was not a DJ, so my friend knew that I listened to many
different kinds of music, and he offered me to play that night. After
that night did not want to do anything else at the club, only DJing.
As I mentioned before, we met some years after and have been playing together since
then. About the production we started around two years ago… Marcio
Vermelho was in my house because he played in one of our parties, and
we were talking about his amazing edits. Then he propose us to do an
edit together and that day was the first time that we do something
with production programs.

Our next gigs are in Brazil. We will do in February one week tour that will include gigs at :
Sao Paulo (D-Edge, Cio & Igreginha), Rio de Janeiro (La Folie) and
Juiz de Fora (Cafe Muzik). After that got some more in Europe.

Our first original track will be released by Bordello A Parigi in March, and we are working in some tracks, Ep’s and remixes for
labels like Red Laser, La Dame Noir, Mix Le Fun, Melomana (Gameboyz upcoming label) or Emerald & Doreen, among others.

We don’t have a favourite club. Usually we really enjoy everywhere. Although we would
highlight to “Homeless” in Salamanca, and “Creando Ambiente” in Burgos
(two cities near Valladolid). Castilla (our region) is a very
difficult area to do parties as there is not a club scene, but these
guys have long been fighting to build a small club scene here and
currently host some great nights.

We don’t know if these are our all-time favourites, probably not, but we
really love these five tracks


Tell us about 5 tracks that you currently play out

Tell us about 5 tracks that you currently play out


Discuss some of your influences?

No specific influences, both have listened a lot of different music since we were kids.

How do you select guests for your mix series?

We do not choose them because they are friends or great producers… there is only one
premise, that we like the music they play. This is about DJ’s or
selectors. Nothing more.

Probably my favourite mix that they do :

This one is good as well :