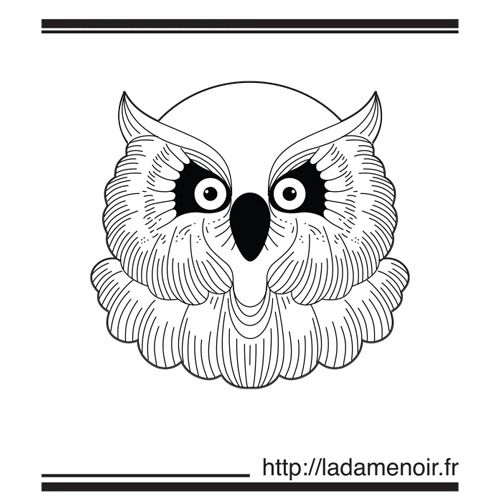 La Dame Noir are one of our favourite discoveries since we started Death By Repetition , the label has released some fantastic music over the last year including the “Long Long Summer” compilation which we featured here.

So it brings us great pleasure to announce that Phred from the label has agreed to take part in an interview with us and also Relatif has recorded a guest mix for us!! EXCITING STUFF!!!

Here is the guest mix TURN UP LOUD !!

Here is the interview:

So tell us about La dame Noir what is it?

La dame Noir project started with a blog then a bar but, today it’s not only this as it evolves into a club “LdN Dancing”, a radio show “Dance With The Enemy” and a label too, “La dame Noir Records”.

In a way “La dame Noir” is how we labelize our work, our identity and the platforms we offer.
We are Djs so we want to share music that we love on many different platforms …

Who are La Dame Noir ?

Most of the people we are working with like bar attenders, graphic designers, producers and resident djs are close friends or even family.

Where are you based ?

La dame Noir bar is based in Cours Julien area while LdN Dancing is on “Le Vieux-Port” de Marseille.

When selecting artists for your shows and releases how do you go about it?

Concerning the releases, Marseille’s producers and our friends are the priority, we try to get them in the game as much as possible and as long as the music fit to “our sound”. Still we can sign people that we never met if they come to us by themselves with music that smells like LdN.

Concerning the shows, we invite all those dj / producers we are collaborating with, and as it is a small scene and that we get a club we try to let the doors open for the labels that are in the same groove than us when they request so.

I have to add that we are lucky in Marseille cause there is some dj locals way better than those so called expensive super stars, so we try to book them on a regular basis.

What releases , tours etc are coming in the next year?

Our next releases will be by Amevicious, Johnson and then after we do not know yet even though we have different possibilities nothing
is definitive yet, you can expect a follow up to “The Long Long Summer” Compilation too.

Concerning the tour we are not working with any dj agency or management yet,
As we love to play in our venues, we are in no rush. We are speaking with some of those structures but nothing signed yet.

615 is my favourite track of yours so far which is your favourite release so far?

We are really excited by each new release and we keep on playing the first ones, it is really difficult to choose but I would say our late may release : Did Virgo “Come To My Galaxy EP”. Did is one of our closest long time friends, one of Marseille top 3 djs and we are really proud of his work.

Still I have to say we are really proud as well about having reunited Pete Herbert & Danton Eeprom on our 5th Release and our mexican mafia Lokier & Inigo Vontier & Dan Solo & Zombies In Miami’s release are so fuckin’ chic !

Do you guys have a studio if so what gear do you use?

We are only started to release our own tracks under “La dame Noir” name, I’m working on this production project with Amevicious and our singer Mounissa, another close friends might join us soon to inject his “rockfish” touch in our prods. Still right now we don’t really have a studio, we will soon try to fix this issue…maybe.

Name 5 of your favourite tracks ?

The Kills – “Passion Is Accurate”

Name tracks that you currently love ?

La dame Noir “La dame Noir” is an art-direction inspired by slow-motion disco and night-creatures. Mainly concerned by music, photos & design “LdN” started as a blog but quickly evolves into a bar, some parties, a club, a japanese canteen, a record label, a producer pool and now an hotel room. La dame Noir is an international collaboration with dis, producers ,rock & roll bands, japanese chef, photographers, designers, graphic designers and much more to make all this happening.

February 2009 : La dame Noir Bar Phred & Hugo Jurado open “La dame Noir” bar in the center of Marseille, south of France. Quickly it becomes full up with a cool crowd and all the graphic designers, clothing label staff, photographers, models & every crewting people start to favorite the venue. Thanks to the bar, the blog and their special vibe, La dame Noir became the french reference for slow-motion & nu-disco and because of this many dis agree to play in this bar even if it is a 70 square feet meters and 150 p capacity max, venue and some of the best djs/label/magazine became residents.

May 2011 : LdN New Club Hugo & Phred started to collabore on a steady basis with Relatif Yann to open “La dame Noir dancing”..Bar was too busy and closing to early, LdN starts a 250p capacity club on Marseille Port. Same kind of prog than in the bar, djs starts to play in the bar and finish now @ “LdN Dancing”. Simian Mobile, Disco, Ivan Smagghe, Chloé, Pachanga Boys, The Hacker, David Shaw and The Beats and so many are invited..

Spring 2013 : La dame Noir 2nd Remix La dame Noir next Remix will be for Yoshitaca/Tokyo it will be released on Jef K record label : Silver Network.

Summer 2013 : La dame Noir 3rd & 4th Remix A remix will be down for “Danton Eeprom & Pete Herbert” and another one for Amine Edge & DANCE