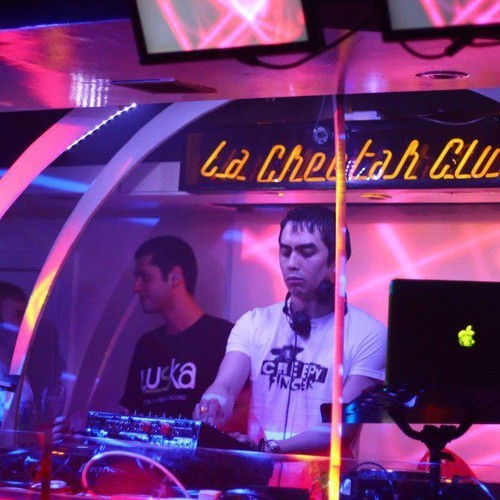 At Death By Repetition we like to support music from all over the world from all the various scenes but we always want to show some love and support to the Scottish scene as well ! Nino Blink is a DJ/Producer who is involved with the Scottish Techno/ House label Creepy Finger Records which has produced some fine tracks recently including a Beatport no1 ! He has also been involved in club nights under the same name which introduced me to quality acts such as Gabriel Ferreira !

Nino has very kindly agreed to an interview and guest mix from the blog which is full of Dark, Funky, Creepy, Weird and pounding Techno so TURN IT UP LOUD!!

Where are you from ?

I’m based just outside Glasgow.

Creepy Finger Records whats it all about ?

Creepy Finger was started by myself and Terry Whyte at the start of 2012. We wanted a platform to showcase our music and also like minded artists. Terry and I had have known each other a very long time and got talking about the idea of starting a record label. It didn’t take long for us to agree on what we wanted, and where we wanted to go with the label so we seemed to get it up and running pretty quickly. We wanted to bring something different to the table, something a bit darker than the usual.

What do Creepy Finger look for in an artist?

The number one thing is the music, we love groovy bass lines and obscure synths. It also has to be well produced and unique.

It was mixed on turntables with an EFX1000. It’s some of my favourite tracks that I’ve been playing out recently.

Any advice to give to aspiring DJs

Never give up, if you want it bad enough you’ll get there.

I bought my first set of decks when I was 18 and started off mixing hip hop. Around 2007 I started listening to a lot more dance music and then Terry introduced me to Techno at the end of 2008. He got me in to do a warm up at his club night and that led onto getting my own night at the club. Having a residency taught me so much, about how to warm up properly and how to read a dance floor.

For production I had been messing about with reason but not really taking it too seriously, a few years later Terry showed me Ableton and I was hooked.

I use a mixture of hardware and software. A MacBook Pro running Ableton 9 with Push, a few different VST’s, a MicroKorg, Novation Bass Station 2, Novation Mininova, and a Roland SH-101.

Hobo is always absolutely amazing when he plays, Paco Osuna never disappoints, Joran van Pol is extremely exciting to watch, Reset Robot has done one of the best live sets I’ve ever seen, Gaiser and Matador for obvious reasons, and Richie Hawtin.

Berlin was really special as I’ve always wanted to play there, The Arches in Glasgow really stands out in my mind as well. I also really enjoy playing Club 69 in Paisley. There’s just something very special about that Techno dungeon.

Hobo – “Incise” – Absolutely outstanding production work, the synths in this are stuff dreams are made of.

Gabriel Ferreira – “Schizophrenia” – Gabriel’s got a really unique sound, his tracks are always absolutely top notch. He’s a wizard in the studio.

Talk about some more influences

Some of my very early influences are local guys like Sketch and Chris Harris, they really helped me develop a passion early by seeing what they were doing on their scene. Gary Beck is also a huge influence of mine, I’ve followed him since quite early on in his career so it’s been amazing to see a local guy blowing up the way he has. He also let me remix one of his tracks when I was just starting out which gave me a boost, so I’m eternally grateful for that.

More recently Matador and Joran van Pol, I met Matador when he was playing in Glasgow and listening to his story was really inspiring. Joran’s a proper grafter, he’s put in some amount of hard work to get to where he is. I have a lot of respect for him not just for his music, but also his work ethic.

Name 3 of your favourite tracks

Gary Beck – “Say What” – No matter how many times I hear this track I don’t think I could ever get sick of it.

Fdh – “Neblin” – I still remember the first time I heard this track, blew me away with the sound design and structure, top notch stuff.

Re:axis – Glide – It’s been out for a while this track but I always find it gets an amazing response. Re:axis makes some wicked music.

Heartthrob – Someone Called Again – some right naughty noises in this track.

What stuff is in the pipeline ?

I’ve got another gig in Berlin coming up soon, also some new releases on Swiss label Teknologik, New York based NOSI music, and of course, Creepy Finger.