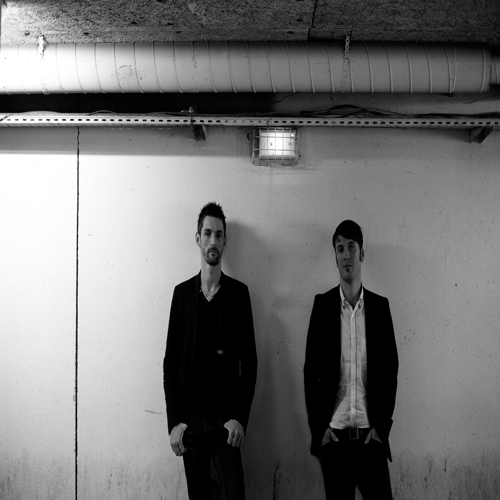 Since I got into Meant Records a couple of years ago I have been introduced to some fantastic music and Monoblok and PSLKTR are some of the labels finest exports!They always produce great tracks and DJ mixes!They have kindly agreed to do an interview for the Death By Repetition blog and are also promoting their fantastic new mix which is a compilation which contains tracks only featured in the Astro Lab Recordings compilation, Treasure Hunting Vol. 2!

Where are you from and where do you live (if they are different) ?

We both live in Lille in the north of France, it¹s the 4th biggest city in
France, at the crossroads of Paris, London & Brussels. Lots of people seem
to think we are based in Paris which is a joke when we see our name on
flyers with the Paris mention on it. We live close to Belgium so when we
were younger we experienced the clubbing scene in this country, much more
than in the other cities of France. It was such a kind of religion for the
clubbers to go out from Thursdays till Sunday.

It was around 2008, we were both involved in throwing parties in Lille. At
one point, we played in the same itinerant festival organized by Monoblok
with gigs in Lille, Geneva and Berlin. The Berlin gig unsurprisingly
finished with a crazy after party at Panorama Bar where we found some
similarities in our musical backgrounds and also in our party hard behaviour.
After many Jagermeister shots we decided to meet up the next Thursday at
Monoblok¹s studio. Since then we have been meeting every Thursday and a true
bro¹ story is born. That night in Berlin means a lot to us, Andrew
Weatherall was the DJ  playing at P Bar that morning – one of our all time
heroes – and now he¹s playing our tracks and really enjoyed our live set when we
played with him. As we say in French : La boucle est bouclée.

How did you get into DJing, Producing , working with fantastic labels such as Meant Records?

At the beginning PSLKTR was the DJ and Monoblok the producer/live performer
but this distinction is much more blurred now.  PSLKTR started DJing in the
early 00¹s and was resident at one of the best underground techno club in
France called Kiosk for many years. Monoblok went through the pains of
receiving a classical training when he was a child, and later got involved
in a number of bands and projects ranging from jazz to industrial music as
well as punk rock and electro acoustic experiments. He started producing and
mixing electronic material in the late nineties, always keeping his guitars
at hand just in case…

Meant Records is definitely our home base, we sent a demo to Remain & Siskid
and they immediately signed us and pushed us in our rock boundaries. But
more than all, that¹s the friendship, the trust and the long term vision
which made us think that this label, more than being forward thinking, is
our family.

Tell us about any upcoming releases ?

We have just released a remix on the latest Meant Records by Canadian duo
Vosper, Marc Houle is also on the remix duty on this EP. We had one of our
tracks featured in what we think is the compilation of the year, Treasure
Hunting Vol.2 on Astrolab Recordings. In 2014, we¹ll have a special and
limited vinyl release on Astrolab Recordings also with fabulous contents we
can¹t talk about right now but you can trust us this one will be really
special. To conclude we also have 2 new tracks nearly ready for another EP,
we are finalising those but we think it¹s the sweatiest work we have produced
to this day.

Most of the our work in the studio is based on a computer setup, but we also
like to use some old analog gear, which can mostly be heard on our recent
tracks. We don’t have a really rigid and strict way of working, and we
strongly believe that there should always be some element of spontaneity and
surprise left in the creative process, so we often have this kind of live
approach in the studio. At first (after an mandatory cold beer of course) we
spend a lot of time playing with different patterns, musical ideas and sound
sketches, and we jam and tweak all of this until we get to a point where we
both sense that something good is happening.

Then we build a track out of it, working some kind of reverse engineering:
We already have all the stuff that will be the peak of the track, and we take it all
apart and see how we can structure all the separate elements together so that the track
progresses in a natural and coherent way. Very often in the process we get
stuck at some point and feel that there’s an element missing, and that’s
usually when we add guitar parts or vocals, which most of the time redefine
completely the atmosphere of the track.

The Velvet Underground : Venus In Furs


Low is one of my all time favourite Bowie albums, it’s actually very hard
to pick one track as all the record is awesome. Brian Eno deserves much
respect for the incredible production work he has done on this record, this
is one of those truly visionary and ever influencing albums that defined a
lot of the music from the last decades.

This record used to be played a lot at home when I was a kid. I remember
listening to this brilliant hypnotic track again and again, and I’m still
really impressed with the sound those guys achieved at the time,  how modern
it still sounds today.

Tell us about 5 tracks that you currently play out

We mainly tour in France so we will definitely say La Dame Noir in Marseille
where place, music, crowd, residents, staff & the food are completely
awesome. Rachdingue in Spain is truly a magical place also and not to forget
all the places which welcome Meant Records Night like Showcase in Paris or
Wilde Renate in Berlin. We really hope to visit UK soon, never played there
and regarding our musical roots that would be so great to burn cities like
London, Manchester, Bristol or Belfast

Discuss some of your influences ?

Actually we are into so many different things that discussing our influences can get
quite complicated!

An Interview with Sean Johnston

An Interview with Moscoman