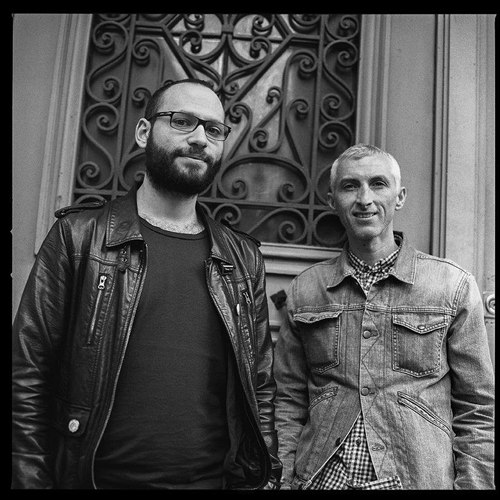 As anyone who has read Death By Repetition will know we are big big fans of Club Bizarre!!They were one of the acts that we wanted to feature when we first started the blog last year and they are going from strength to strength !

Sam & Philippe have agreed to do an interview for us so here we go….

We’re from Metz, small town near the Luxembourg border, on the French side.

Well, long story short, we’re friends before partners. We had the idea to make a night together and named it “Club Bizarre”. At the time it was very spontaneous to be honest. “Club” because it was an association of two people doing one thing together, “Bizarre” because we’re probably the only ones having this sound in our small city. There are some people doing good electronic music of course, just a different kind. All of this is tied up by the fact that our music is “Club” orientated I suppose. Anyway, we played several “Club Bizarre” nights and decided to keep the name for ourselves to play as the duo you know today…

In some bar maybe ? We couldn’t really remember. The thing is, we had lots of friends in common and have been introduced one to each other like this.

We have the same story on the DJing point, but different times. We just loved music and were very intrigued by DJ’s, so we bought some gear and started DJing at home. Nothing really uncommon.

We started producing together with Club Bizarre. At the beginning we worked with loops and samples, stems we found on Beatport contests and everything we could basically, anything we could improve with. Some friends showed us tips too and we can thank them for this. Then after a while, Days Of Being Wild offered us the chance to do a remix for Catalepsia on his Conducting the Band single. That’s the first production you can find from us on the internet.
Now we have walked a long road, learned a lot (still learning everyday though) and almost never sample anything. We have invested our fees in synths and stuff and continue to buy some to build a decent home studio.

Of course! We just released our second EP on Days Of Being Wild with top remixes by Moon Runner and Kiwi. We’re waiting for an EP to come out on Astrolab with two original tracks and two remixes. We have a single due on the mexican label Mix le Fun. We also have original tracks coming out on several compilations, especially on the awaited new Clouded Vision Experiment. Plus we’ve produced several remixes, for Italo Brutalo, Tunnel Signs, etc… we don’t wanna write a list but there’s a lot to hear from us in the future! We can tease you a bit saying we’ve produced an EP with the Jokers of the Scene recently and we’ll release it under the name of “A Jokers Bizarre”. Can’t say more about this for now but we can’t wait to share this!

We had the chance to play in Berlin recently at Cosmic Kaspar, we’ve also been invited to the 5th birthday of Orlando Boom at Queen of Hoxton in London, and we just come back from Madrid where we played at Sport Club which was basically the best gig we ever had. We’ll hit Tel Aviv on the end of May at Bootleg and that’s pretty much all we have confirmed outside of Metz for now but we’re looking forward for more 🙂

A live set has just recently been recorded for Sport Club in Madrid and will be available on Soundcloud next week !

We’re only speaking of tracks that came out since we play as Club Bizarre though. We’d write down many more if could…

Tracks that you currently play out?

Another 3 songs that are not released yet….

We can definitely put Sport Club number one! We’d love to play at Rex Club of course, Smala, Robert Johnson, Renate, iBoat, Leftorium… just to name a few. Scotland, USA, Canada would be great too, any place we could have fun 🙂

Discuss some of your influences?

Again we won’t do a full list. We’ve had the chance to be remixed by Chloé on our first single and played with her once, that was a good experience and definitely an influence! We also had a nice contact with Ivan Smagghe when we invited him in Metz to play. We feel lucky to have worked with the Jokers of the Scene on that EP.. There are basically too much people we admire to name them all!

How do you guys produce music is it software etc?

We tend to get more and more hardware, all plugged and synced on the soundcard. We do the arrangements in Ableton. Everyone has his own way to do things but we feel more comfortable and have more fun having something else than a mouse in our hands. We don’t believe there’s any kind of recipe or whatever though.

How did you get working with Days of Being Wild and other labels that you worked with ?

We first started to play the releases when the label was really small and made contact after that. Then they offered us the chance to remix Conducting the Band as we explained before and encouraged us to show them our first single La Mort Du Petit Cheval. Jérôme and François have been very important for us and we’ll never thank them enough for this. Then it’s a mix of gig-meetings, people you contact because you like their work and people who contact you because they like yours. God bless the Internet sometimes.

You guys are now working as A and R for DOBW how do you source new music ? What advice would you give to new artists looking to have music released/signed etc?

Sam does indeed. New music is most of the time sent to the label directly, or to him. Sometimes he just listens to something and finds out it’s still white label, there’s no rule there.
New artists shouldn’t be afraid to send their music as we listen to everything that’s sent.

Anything else you want to add?

Well nothing much except thanking you Andy for your time and interest.  You’re one of the early followers and we appreciate that.

Interview with the Gemini Brothers
Tags:Club BizarreDays of being wildInterview
Previous Post
Next Post
Copyright © 2022 Death By Repetition. Site Created by Andrew Rainey.