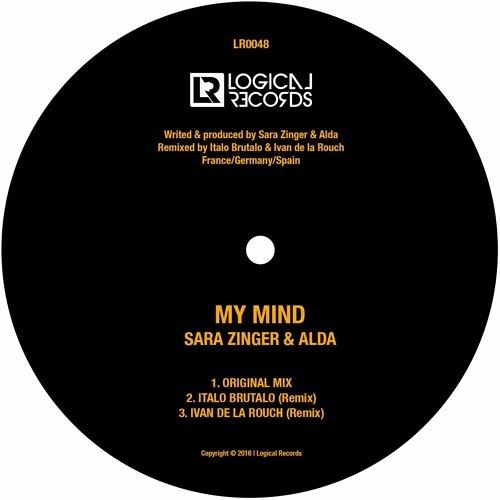 Delighted to share a Premier of Italo Brutalo’s remix of “My Mind” by Sara Zinger and Alda!!

TURN THIS UP REALLY LOUD !!!

A little bit about the release :

The German producer ‘Italo Brutalo’ has remixed the original Track getting an awesome Dark Disco sound respecting the nuances of the Original Track.

Last Remix was made by Ivan de la Rouch, Logical Records boss label and a part of LosBikini duo, with an amazing Dark Disco sound .

We are very pleased to announce the Official Debout of Sara Zinger with her first release in Logical Records. Born and raised in north France she travelled a lot and settled in Marseille 7 years ago. She started djing at that Time and later on came the production. Producing singing and djing is what she aims to so that she can deliver her own artistic performance from A to Z once behind The desks.

ALDA started deejaying in the early 2000s and started production in 2008. He dabbled with several different styles – electro, techno, minimal – and trained a long time before putting all his musical projects on hiatus after his child was born. This break enabled him to further develop his way of composing and broaden his array of electronic music INFLUENCES. Releases on Logical Records, Play Pal Music, The Exquisite Pain Recordings , Nein Records and Mange_moi

Here is the rest of the tracks:

Buy the tracks on Beatport !