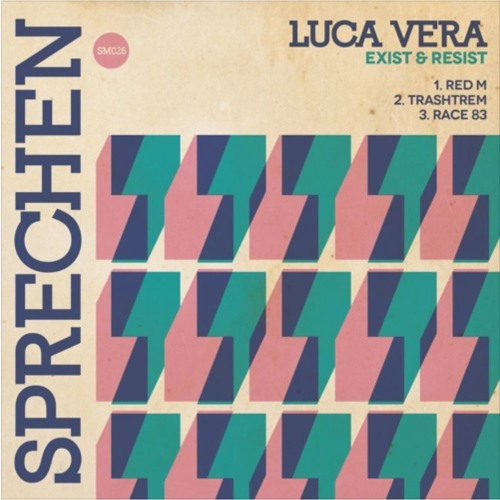 Well we have another Premiere for you this time from Luca Vera!!

I have recently been listening to a lot of older Sasha and Digweed mixes and this whole EP would certainly not look out of place (although it also sounds quite modern as well!!)

Here is a bit about the EP:

Our man from Italy, Mr Luca Vera soars back into the land of Sprechen with a 3 tracker of late night ‘cosmic-disco-house-with a bit of almost techno & noir balearica pop’ style jams!

Red 3 opens up the party gates and sounds like it jumped ship from a lost 80’s sci-fi flick that was dreamt up in Baldelli’s Cosmic Club back in early 80’s Italy. Warped synth sounds, rat-a-tat-tat percussion & chords that sound like they’ve been lifted from a Claudio Simonetti soundtrack.

Trashtrem goes straight for the throb button with some stuttered style synth stabs, lush pads & a bass line to test out the Funktion1’s…this puppy drives & drives. Serious heads down tackle.

Race 83 is one heck of a hybrid! Sounding almost like something from the Sasha & Digweed Twilo era, this is proggy but with bags of energy & soul that builds like heck and then drops in with some reverb drenched piano chords for that added ‘E’ injection.

Another Premiere from the EP: