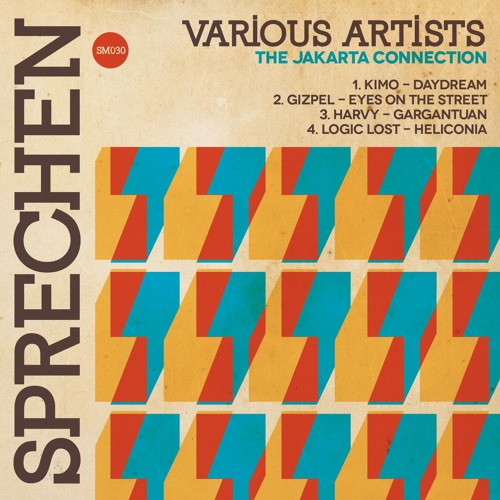 So the next release from Sprechen comes in the form of a four track EP called “The Jakarta Connection” from various artists from the scene over in Jakarta!

You can listen to the EP and purchase the tracks here:

Opening track “Daydream” by Kimo is a lovely Balearic track that would just be perfect on a boat party in the middle of the Adriatic Sea….

We also have an interview and guest mix from Kimo!

“Eyes On The Street” by Gizpel is not what I would be expecting to hear from Jakarta!! To my ears the track sounds like a poppy mixture of the Horrors and Interpol and I look forward to seeing what else they come up with!

The friendship & bond between Sprechen and the exciting musical minds from Jakarta continues to grow!

What started as an initial meeting of musical minds via the internet has resulted in a collaboration studio project, collaborative club nights, live performance events and label releases/

This compilation is a showcase of some of those we have met along the way and features a selection of artists that our boy Chris Massey caught in his last trip to Jakarta…he says ‘there was so much familiarity to what I heard with influences being clear yet everyone still had a huge amount of their own uniqueness in what they were doing which made for such an exciting experience!’.

Sounds of low slung chuggy acid from Kimo, guitar based dream pop by Gizpel, throbbing techno pulses by Harvy Abdurachman & tripped out psychedelic drone ambience by Logic Lost all present just a taster of the sounds from Jakarta.

Amazing music from some truly amazing like minded souls!